Definitions and examples of the elements of figurative language. Prezi’s Big Ideas 2021: Expert advice for the new year. Figurative language are words, phrases, or statements that we use in conversations but its meaning is not literally what it says. So when somebody says, ‘I was late for school because it was raining cats and dogs!” – it doesn’t literally mean that there are cats and dogs falling from the sky but that it is raining very hard.

Figurative language uses figures of speech to be more effective, persuasive, and impactful.

Figures of speech such as metaphors, similes, and allusions go beyond the literal meanings of the words to give readers new insights. On the other hand, alliterations, imageries, or onomatopoeias are figurative devices that appeal to the senses of the readers.

The term figurative language covers a wide range of literary devices and techniques, a few of which include:

Examples of Figurative Language from Literature

Example #1: The Base Stealer (By Robert Francis)

Poised between going on and back, pulled
Both ways taut like a tight-rope walker,

Now bouncing tiptoe like a dropped ball,
Or a kid skipping rope, come on, come on! …

Taunts them, hovers like an ecstatic bird,
He’s only flirting, crowd him, crowd him,

The similes and word choice of this poem makes it a masterpiece. The poet use similes between the lines to depict his scattered thoughts before taking action, and makes comparison as, “like a tight-rope,” “like a dropped ball,” and “hovers like an ecstatic bird.”

Example #2: I Know Why the Cage Bird Sings (By Maya Angelou) 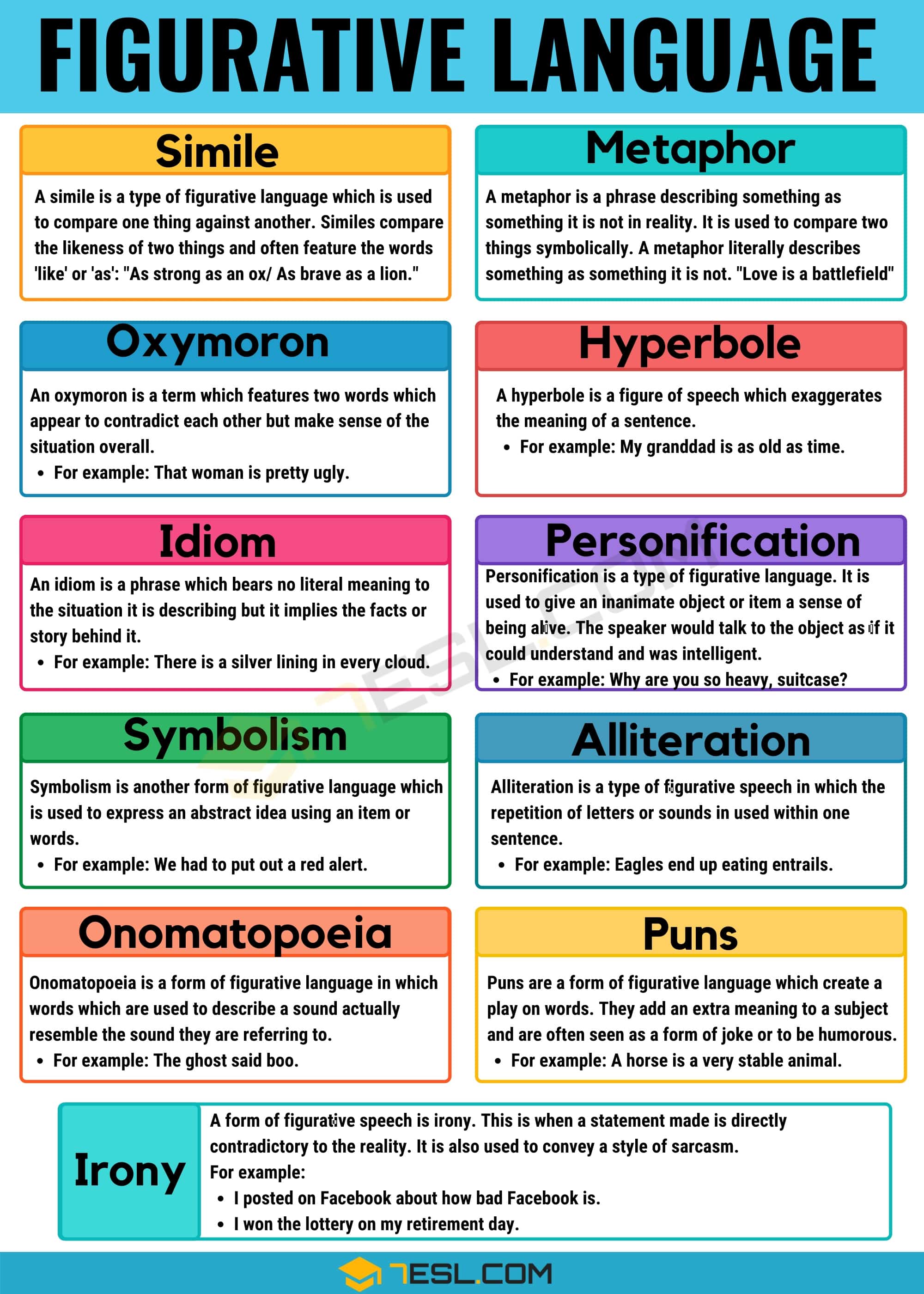 The entire poem is rich with metaphor as a bird in a cage represents a group of people who are oppressed and cannot get freedom. The cage represents physical barriers, fear, addiction, or society; while the song of the bird represents true self yearning for something greater in life.

Example #3: She Sweeps with Many-Colored Brooms (By Emily Dickinson)

She sweeps with many-colored Brooms
And leaves the Shreds behind
Oh Housewife in the Evening West
Come back, and dust the Pond!

Dickinson uses personification of a housewife to describe the sunset in the very first line of this poem. She is using a sweeping housewife who does her daily work, likewise the rays of the setting sun sweep away beneath the horizon.

Once upon a midnight dreary while I pondered weak and weary;
rare and radiant maiden;
And the silken sad uncertain rustling of each purple curtain …
Deep into that darkness peering, long I stood there wondering, fearing,
Doubting, dreaming dreams no mortal ever dared to dream before.

Poe uses alliteration by repeating the /w/ sound to emphasize the weariness of the narrator, and then /r/ and /s/ sounds in the second and third lines respectively. In the last two lines, the /d/ sound highlights the narrator’s hopelessness.

Example #5: The Rime of the Ancient Mariner (By Samuel Taylor Coleridge)

Ah ! well a-day ! what evil looks
Had I from old and young !
Instead of the cross, the Albatross
About my neck was hung.

In these lines, the albatross symbolizes a big mistake, or a burden of sin, just like the cross on which Christ was crucified. Therefore, all people on the ship agreed to slay that bird.

She ran down the street, the green knee socks making her legs look like wild dandelion of stems that had somehow lost their heads. The weight of her remark stunned us.

This excerpt uses different devices that make language figurative. There is a good use of simile, “legs look like wild dandelion;” and personification, “lost their heads;” and use of consonance in “stunned us,” where the /s/ is a consonant sound.

Example #7: The Week of Diana (By Maya Angelou)

“The dark lantern of world sadness has cast its shadow upon the land.
We stumble into our misery on leaden feet.”

in just these two lines, Maya Angelou has used a metaphor of the dark lantern, consonance of the /s/ sounds, and personification of misery.

Example #8: The Negro Speaks of River (By Langston Hughes)

Examples Of A Figurative Language

This prince of the Harlem Renaissance has beautifully used a different type of consonance with the /l/ sound and a simile of “my soul.”

That even the dreadful martyrdom must run its course
Anyhow in a corner, some untidy spot
Where the dogs go on with their doggy W. H. Auden life and the torturer’s horse
Scratches its innocent behind on a tree.

W. H. Auden has used a personification of the “dreadful martyrdom,” and consonances of “some untidy spot,” with the /s/ sound, and “dogs go on with their doggy life,” with the /d/ and /g/ sounds.

The primary function of figurative language is to force readers to imagine what a writer wants to express. Figurative language is not meant to convey literal meanings, and often it compares one concept with another in order to make the first concept easier to understand. However, it links the two ideas or concepts with the goal of influencing the audience to understand the link, even if it does not exist.

Essene book of mosesrejected scriptures. From the essene book of moses THE TEN COMMANDMENTS 1 And Mount Sinai was altogether in smoke because the Lord descended upon it in fire: and the smoke thereof ascended as the smoke of a furnace, and the whole mount quaked greatly.

What Is Figurative Language

Poets and prose writers use this technique to bring out emotions and help their readers form images in their minds. Thus, figurative language is a useful way of conveying an idea that readers cannot understand otherwise, due to its complex and abstract nature. In addition, it helps in analyzing a literary text.