GPS devices can be boring with those robotic sounding voices that tend to come on most devices. TomTom has announced that it will be offering Star Wars voices for some of its GPS devices. 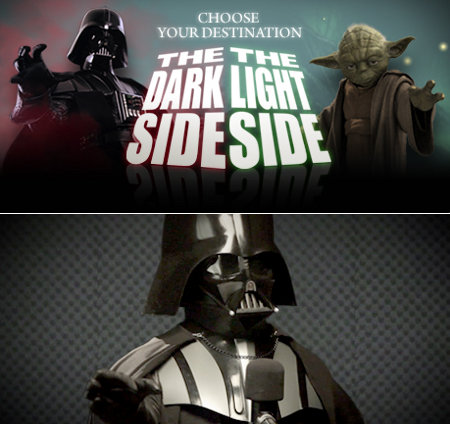 The first voice for TomTom users is that of Darth Vader. An authentic sounding Vader voice tells you where to go and leads you down the path to the Dark Side and your final destination. Other Star Wars voices will be coming as well.

You will be able to choose from C-3PO in June, Yoda in July, and Han solo in August. The voices will all sell for £ 7,95 and you can get free content for start screens, car icons and more to go along with the voices.

As reported by TomTom
London - The Force is strong with TomTom drivers- and it's about to get stronger. As of today, in association with LucasFilm and VoiceSkins.com, TomTom customers can be guided by the greatest Jedi Master of them all: Yoda.
Joining Darth Vader and C-3PO, Yoda is the latest official Star Wars voice to launch exclusively for TomTom devices. Han Solo will complete the line-up of fan favourites in August.
'With incredible Jedi powers, Yoda is the ideal voice to guide Star Wars fans on their journeys,' says Alain Pakiry, Senior Vice President for Marketing at TomTom. 'Yoda is one of voices most frequently requested by the TomTom community. So we're thrilled to launch the official Yoda voice, available only on TomTom devices.'

'The TomTom brand is synonymous with high quality navigation. Star Wars fans are sure to be delighted when they hear just how great these voices sound on their TomTom navigation devices,' says Casey Collins, sr. director of international licensing and marketing at Lucas Licensing.
A powerful Jedi warrior Yoda may be. But his quirky diction and mischievous personality also make him one of the most charming characters in the Star Wars universe - and one who adds a whole galaxy of fun to TomTom GPS voice commands. Incorporating dialogue inspired by the original Star Wars films, Yoda's navigation instructions include 'After 700 hundred metres hmm, keep to the right then take a sharp left. Control, control, if a Jedi you wish to be.'
The Yoda voice also comes with ghostly encouragement from Obi-Wan Ben Kenobi taken from the original films and embedded into the navigation commentary. John Williams' touching 'Yoda's Theme' music is also interwoven with certain commands, providing a richness and cinematic experience rarely heard on navigation systems.
In addition to Yoda's voice, TomTom has launched a range of official Yoda wallpapers and alert sounds voiced by the Jedi Master. TomTom customers can download these items for free to ensure their TomTom device is enlisted in the service of the Jedi.
All official Star Wars voices for TomTom devices are available in English, while Yoda and Darth Vader are also now available in German. Further languages will be available throughout the summer.
To hear Yoda in action, find out more about official Star Wars voices for TomTom devices, train as a Jedi in TomTom's Star Wars game, and watch the brand new viral movie featuring Master Yoda.
Coments are closed
M0 (by Topics)mth ReviseBob Nothing On You Download