Marble Blast Ultra is a 3Dpuzzleaction game involving a marble developed by GarageGames. It was released on January 25, 2006 for the Xbox 360 via Xbox Live Arcade. It is the sequel to Marble Blast Gold. It features 60 levels, enhanced graphics, 2 new power-ups and a multiplayer mode. A PC port of the game under the title Marble Blast Online was available at InstantAction until the website was shut down. As of year-end 2010, Marble Blast Ultra has sold over 756,000 copies.

In Marble Blast Ultra players navigate a marble through obstacles and gaps to reach the finish in sixty levels.

In Single player mode, the player has the main goal of reaching the finish pad of the level as fast as possible. Obstacles will hinder the player's progress, but powerups are also provided to help the player finish the level. There are sixty single player levels that can be completed by the player. They are divided into Beginner, Intermediate, and Advanced Levels, each category containing twenty levels. Many of these levels (such as 'Survival of the Fittest', 'Natural Selection', and 'Ordeal') are recycled from Marble Blast Gold.

There is a par time set for each of the levels, and if the player beats the level under par time, the player will earn achievements based on how many levels they successfully completed under par time. Additionally, if the player has Xbox Live connection, his or her best time will show on a leaderboard where players worldwide can compare their best times. The leaderboard is updated whenever a player gets a new record time.

The game makes use of two new power-ups:Ultra blast - instantly increases the blast meter, and adds more power. The player can even perform a double jump.Mega marble - makes the marble bigger, allowing it to knock other marbles off-course. The power-up lasts at least 10 seconds before the marble shrinks back to normal.

Multiplayer mode contains 20 levels and supports up to 8 simultaneous players. There is only one mode which consists of collecting gems within a certain time limit (three to six minutes), which depends on the level. After a group of 2-6 gems are collected entirely, another set of gems appear elsewhere on the board. Players race to these gems and use power-ups to navigate across the level quicker and interfere with other players.

There are three types of gems: red, yellow, and blue. Red gems are worth one point, while yellows are worth two and blues are worth five. Most likely, blue and yellow gems are much harder to get than the red ones. The player at the end of the time limit with the most points wins. Players can change their marble's appearance by choosing from a variety of patterns and pictures in the main menu, such as a globe marble or a tiger marble as well as adding several different effects to use online. Ranked matches and player matches are supported along with an overall multiplayer leaderboard for ranked and player matches. Users can create a game or join one and filter parameters such as level, players, and gamer zone. Private games are also supported.

On December 5, 2007, Marble Blast Ultra was made an Xbox Live Arcade Hit and had its price lowered. In 2008, three new achievements totaling 50 gamerscore were added to Marble Blast Ultra on Xbox.com.[1] On Wednesday the 29th of October 2008 a new downloadable content pack was made available which contained a new multiplayer level 'Marble It Up'. On December 3, 2008 the Marble-Fu map pack was released, and on December 23, 2008 the Agoraphobia pack was released.[1] Each pack contained five maps and was available on InstantAction prior to their Xbox 360 release.

On February 12, 2011 Marble Blast Ultra was delisted from the Xbox Live Arcade service resulting in the game being a lost Xbox Live Arcade game as the full version has not resurfaced since. Despite this, a Microsoft Windows version was released later that year. GarageGames, now a subsidiary of Graham Software Development, retained the rights to the Torque Engine which powers Marble Blast Ultra, but not the rights to the game. Game rights are property of InstantAction Holdings. GarageGames CEO Eric Preisz said that it was 'unlikely' that the studio would reacquire the rights to its games.[2]

Members of the development team later worked on a spiritual successor, Marble It Up!, which released for the Nintendo Switch in September 2018[3] and subsequently for Windows[4] and Apple Arcade.[5] 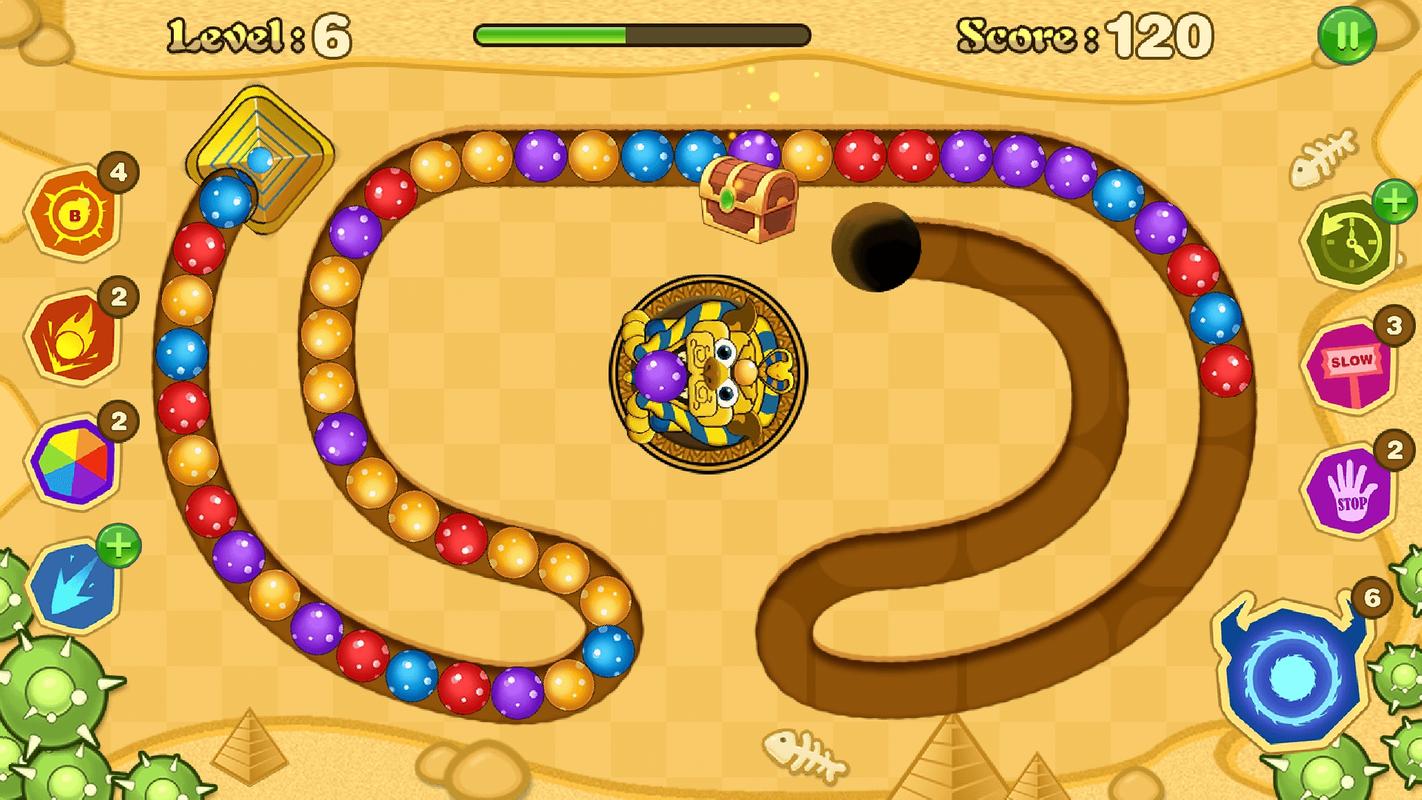 Try Not to Lose Your Marbles 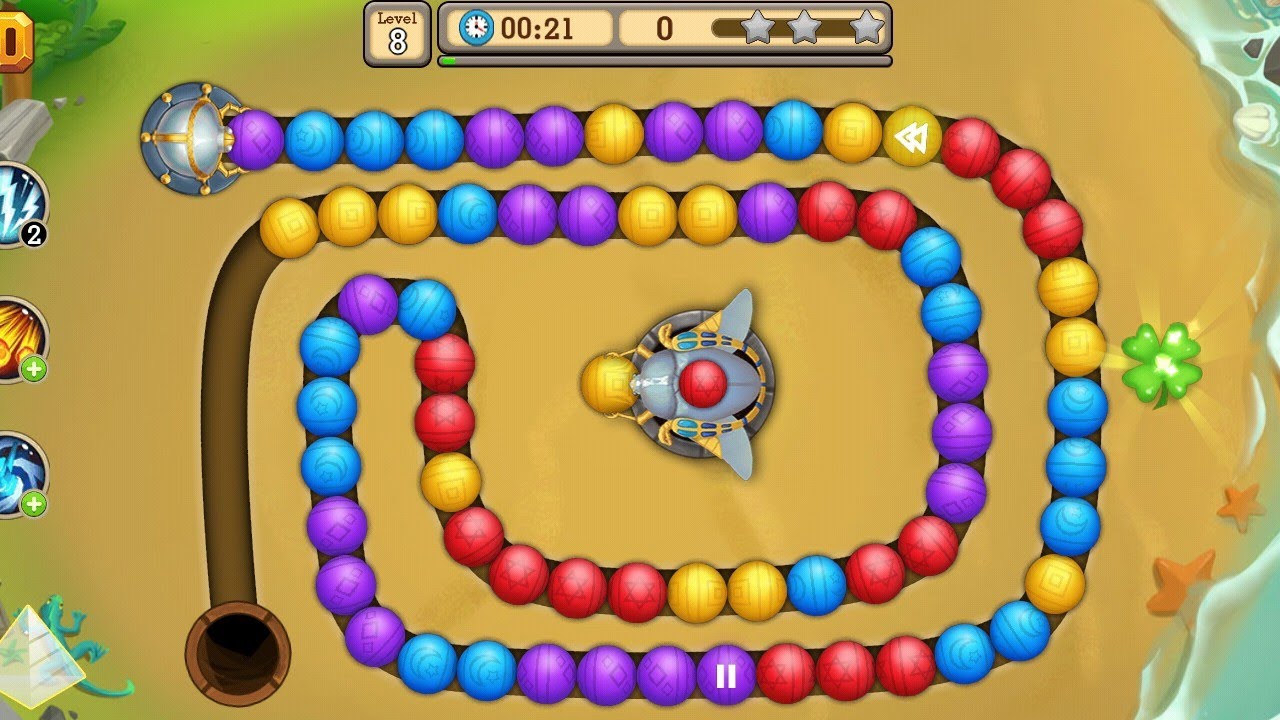 People who are into puzzle games are sure to have noticed that many of the offerings these days follow the same theme. Marble Blast Gold is really no exception, although it promises lots of cool content. Read on to discover if Marble Blast Gold contains enough features to give it the edge over the competition.

As you would expect, the game play in Marble Blast Gold is very similar to that of the other puzzle games of this type. Players are presented with a screen full of coloured objects, in this case marbles. A shooting mechanism at the bottom of the screen fires additional coloured marbles. The aim is to fire the marbles in the perfect place to gain collections of three marbles or more of the same colour so that they will be eliminated.

As always, the concept of the game is pretty simple and there is not really too much variation between levels except for the fact that upper levels are a bit more difficult. However, Marble Blast Gold includes a large selection of special power ups as well as hazards that add a bit of variation to the game and help to keep players on their toes. Ittefaq movie review. The graphics are bright and colourful as well as being smooth and detailed. The sound effects and background music match the style of the game well and provide an extra texture to the game that helps to make it even more addictive.

The controls are very easy to use, which makes it easy for players to get into the game. This also adds to the addictive nature of Marble Blast Gold and with a hundred different levels to complete there is plenty here to keep gamers occupied for many hours. The difficulty of the levels is gradually increased as players progress until it is rather challenging indeed. However, novice gamers will find the initial levels simple enough to get into right away and should be able to complete them without too much trouble.

Marble Blast Gold is a fairly challenging game that is sure to keep puzzle game fans occupied for hours. There is plenty of content and different features here to keep players on their toes and the game is worth checking out.